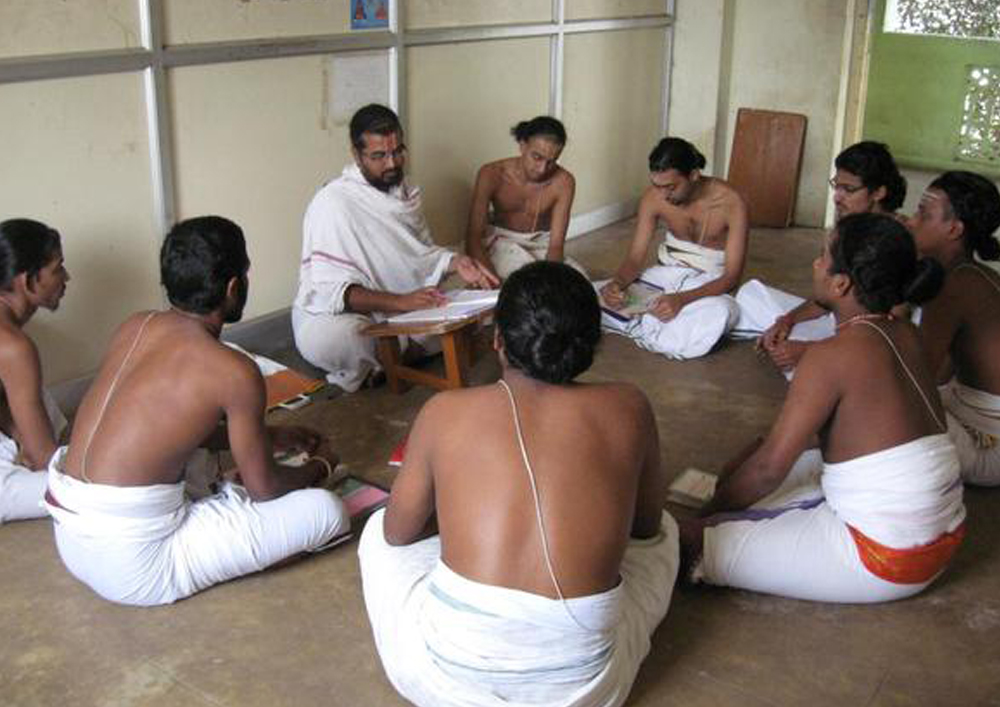 As one gets close to the Madurantakam Rama temple, one hears the euphonious sound of Vedic chanting, indicating that classes are in progress at the Sri Ahobila Math Samskrita Patasala located a few yards from the temple. The patasala, established by Srimad Injimedu Azhagiyasingar, 42nd Jeer of Ahobila Math, on June 24, 1942, is into its Platinum Jubilee year. It initially functioned in the Math, and moved to its own building in November 1942. The patasala has had distinguished teachers, and has produced outstanding scholars. K.E. Govindacharya, V. Narasimhacharya, V. Srivatsankacharya and Annathur Rajagopalacharya from the patasala were Presidential awardees. Srimad Srimushnam Andavan Swami (present pontiff of Srirangam Periasramam) and Srimad Villivalam Azhagiyasingar (45th Jeer of Ahobila Math) studied here.

The Principal S. Varadagopalakrishnan takes me round the school, and introduces the faculty and students. Vasanth, third year student of B.A Sanskrit tells me that he had a sense of home coming when he came to the patasala, because two of his cousins studied here. Students of the institution have distinguished themselves in national contests. Veeraraghavan won a gold medal in a nyaya contest that took place in Haridwar. “Three months before the contest the text to be studied was specified. The questions posed by the judges were challenging,” says Veeraraghavan.

P.S. Narayanan won a prize in a Nyaya contest in Varanasi, and P. Sridhar a prize in an elocution competition on Sri Bhashya. G. Lakshminarayanan is an Asu kavi — give him any subject or a meter and he comes up with a poem in less than five minutes! He has composed an ashtakam in anushtup meter on Erikatha Rama of Madurantakam, and also a svagata sloka for the current Jeer of the Ahobila Math. The reputation of the patasala has travelled far, bringing student Praveenkumar all the way from Madhya Pradesh!

The students also learn Tamil, English and Computer Science. Students of Sri Veda Vidya Gurukulam situated in Kalancheri, Papanasam taluk, are enrolled in the Prak Siromani course of the Madurantakam patasala, and are taught through Skype. J. Sriram, a software engineer teaches the students how to use computers and the internet.

Every Thursday, students attend the Guruvara sadas — a weekly sadas started by Sri Chandrasekharendra Saraswati in Kanchipuram. “For many years the sadas took place in the Varadaraja temple. It now takes place in the Kanchi Math,” says vyakharana lecturer R. Sridhar.

“At least 50 of our students are doing their doctoral studies,” says vyakharana teacher V.R. Rajagopalan, who is doing his Ph.D. in Enathur.

“More than fifty per cent of the Sanskrit teachers in Tamil Nadu are from our patasala,” says the principal. “No one who studied here is unemployed.” An oriental school — the brainchild of Srimad Devanar Vilagam Azhagiyasingar — started in 1953, also functions from the patasala premises.

We gratefully acknowledge the Editor, The Hindu for permitting us to use the article titled “A Strong Vedic link-Madurantakam Patasala” authored by Ms. Suganthy Krishnamachari published in “The Hindu” dated December 8, 2017 under Friday Review “Heritage Faith”